Dangers Of Microwaving Food In plastic

World over, the use of Microwave oven to cook fresh food and to heat leftover food has become traditional. In the United States of America, about 90 % of households own microwave oven-this is according to the US Bureau of Labor Statistics. The number is even higher i. UK with 93% using the appliance.

A microwave oven (commonly referred to as a microwave) is an electric oven that heats and cooks food by exposing it to electromagnetic radiation in the microwave frequency range.  The modern invention of Microwave oven is often generally credited to an American Engineer,  Percy Spencer.  Microwave ovens being a common kitchen appliance is popular for reheating previously cooked foods and cooking a variety of foods. They are also useful for fast heating of otherwise slowly prepared foodstuffs, which can easily burn or turn lumpy when cooked in conventional pans, such as hot butter, fats, chocolate or porridge.  Even as it has become a fast way of cooking ; saving both time and energy, it also has a hazardous outcome to health when food stored in plastic are heated according to research.

If you’re about to microwave your leftovers food in a plastic container, you might want to change your mind and use the conventional means. This is because harmful chemicals in plastics will certainly leach into your food when heated. This is to say that microwaving of food in plastic bring about leaching during which harmful chemicals that has the potentiality of causing high blood pressure and insulin resistance, according to a series of studies by NYU Langone Medical Center in New York City published in Everyday Health magazine.  Also, a publication by Harvard Health Publishing, a health magazine of Harvard Medical School aligned to this claim. In the publication, the duo of Dr. Russ Hauser, chair of the Department of Environmental Health and the Frederick Lee Hisaw Professor of Reproductive Physiology at the Harvard T.H. Chan School of Public Health while answering questions related to the topic made it known that heating plastic in the microwave can release various chemicals into the foods or liquids that you are cooking. Stressing that fatty foods, particularly meats and cheeses, seem more prone to absorbing high amounts of these chemicals. This is concerning owing to the fact that hypertension, and insulin resistance, which is closely linked to prediabetes, are risk factors for type 2 diabetes. It has discovered that these harmful chemicals causes cancer and obesity. 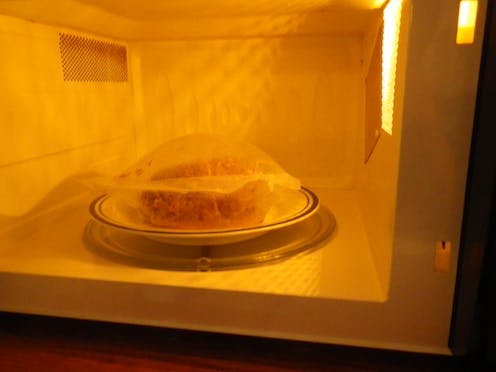 Again, according to a study published in the journal Hypertension, said that chemical, called phthalates, increasingly used to strengthen plastic wrap, soap, cosmetics, and processed food containers have been linked to an increased risk of high blood pressure and type 2 diabetes in children and adolescents.

The author of the study by NYU Langone, Leonardo Trasande, MD, MPP, a professor at NYU Langone was qouted as saying,  “Our research adds to growing concerns that environmental chemicals might be independent contributors to insulin resistance, elevated blood pressure and other metabolic disorders,”

While it is obvious that more research should be carried out, it is factual that microwaving food is harmful to health, thereby more vigilance is needed when handling and cooking food in plastic to avoid self poisoning and prevent prevalent diseases like homonal disorder, obesity, cancer,  diabetes and high blood pressure as their is growing evidence that fingers leaching as the leading cause of these diseases.

Since microwaves accelerates chemical leaching and it will be difficult for one to stop making use of Microwave, it will be good to follow these seven simple but safe rules put together by Margaret O’Malley as published in Everyday Health magazine. As you use plastic wares in your kitchen remember the saying of old which says that prevention is better than cure.

So next time you want to microwave you food stored in plastic containers think about the consequences. It may be a quick way of getting it done but fact remain that the harm it brings live with us.