Reno Omokri, former aide to ex-President Goodluck Jonathan, has hinted that the dethroned Emir of Kano, Muhammadu Sanusi may run for the presidency in 2023.

Omokri dropped the hint while disclosing that Sanusi was dethroned after he, Omokri, prayed to God.

In a tweet, the former presidential aide recalled how the ex-governor of Central Bank of Nigeria, CBN, sued him to court and hired people to attack him.

“Is Sanusi Lamido Sanusi considering running for President. Maina sued me to court. I prayed to my God. 2 weeks later, he was arrested. Sanusi paid journalists to attack me.

“I prayed and he was dethroned. We await his Presidential run. My God is not dead!”

Recall that the Kano State Government had on Monday dethroned the former Emir Kano.

Sanusi’s removal as Emir of Kano was made public by the State Secretary to the Government of Kano, Usman Alhaji.

The SSG stated that the former CBN governor was dethroned due to his total disrespect to lawful instructions from the Governor Abdullahi Ganduje-led state government and the lawful authorities.

Following his removal, the state government immediately named one of the sons of late Emir of Kano, Ado Bayero, Aminu Ado Bayero the 15th Fulani Emir of the state.

Against the backdrop of his dethronement, the ex-CBN governor was banished out of Kano to a remote village in Nasarawa State. 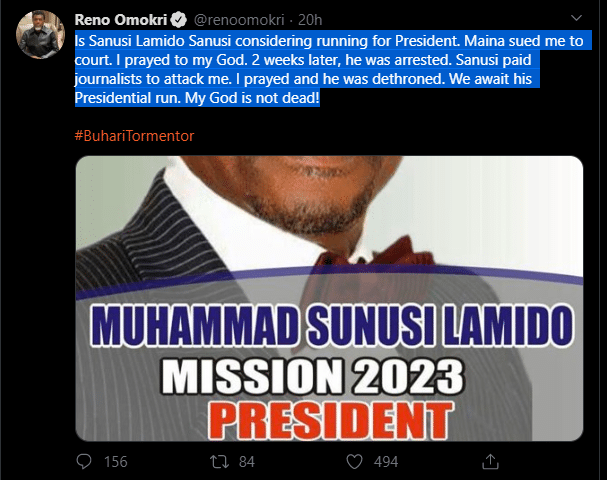 Listen to article In a surprising move on Monday, Somalia’s Lower House of Parliament voted in favour of a bill that seeks to extend President

Listen to article Former Nigerian President Goodluck Jonathan has declared that for democracy to be strengthened, the ballots cast in elections, not the judiciary should