In Nigeria, Governors have been known to enjoy a lot of benefits in office and the jamboree even continues some years after they leave the office.

In a video that has surfaced online, human rights advocate under the Agesis, PENCHOP pension reviews the benefits and severance packages allocated to gubernatorial positions in Nigeria.

With the new law, which is an amended version of the older statutes, a former governor and an ex-deputy governor will be earning a severance gratuity allowance of 300 percent of their annual basic salary as at the time of leaving office.

Provisions for the Lagos State Governor and Deputy Governor Pensions Law of 2007 are also very attractive and make the positions of governor and the deputy governor of the state worth fighting for. 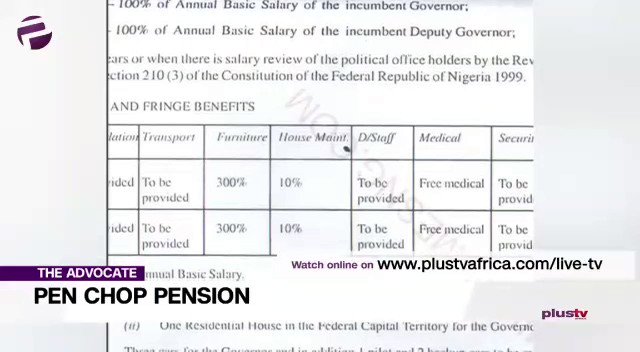 After leaving the office, they are entitled to 100 percent of their annual basic salaries.

The law also makes provisions for three cars, two back-up cars, and one pilot car for the ex-governor every three years.

A former deputy governor is entitled to two cars, two back-up cars, and one pilot car every three years.

The governor also gets six DSS officers and two police orderlies while the first lady is entitled to two female DSS officers.

The deputy gets four DSS officers and police orderly.

Under the law, the state will also bear the cost of medical treatment of ex-governors and ex-deputy governors as well as members of their families.

The advocate ends it with a statement that after all these severance benefits, most Governors still turn the senate into their personal retirement home.

He adds that these amenities be cut down because when compared to their colleagues in other countries, they are living like gods. Siphoning the states’ allowance to their own personal benefits.

These unnecessary amenities and benefits all contribute to the factors which aid in toppling Nigeria’s already staggering economy.

These Governors enjoy mammoth salaries while they groan every day at the thought of paying the newly established ₦30,000 minimum wage to their civil workers. They take pride and joy in owing salaries which span into many months on end while still gluttonously dipping into state coffers.

This leads to the accumulation of state debts and empty reserve accounts. The debt being owed by such states, according to some analysts, is a clear indication that the jumbo pensions for former governors were not sustainable, especially with the low level of development in the states. Which makes some of them to rely on bailouts from the Federal Government to pay their numerous allowances, salaries and pensions.

Listen to article The Chairman of Senate Committee on Army, Senator Ali Ndume has expressed deep worry over the senate’s rush to approve President Muhammadu