Another top tennis player, Borna Coric said he has contracted the coronavirus, a day after Bulgarian Grigor Dimitrov made his status known.

Croatia’s Coric announced on Monday that he has tested positive for the virus after playing in an exhibition tournament with Dimitrov.

“Hi everyone, I wanted to inform you all that I tested positive for COVID-19,” the top 50 player posted on Twitter. 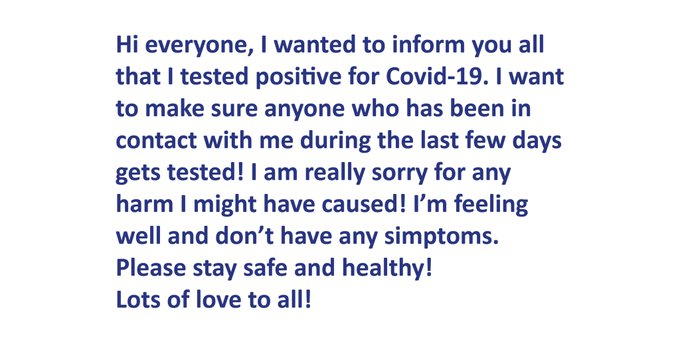 686 people are talking about this

Dimitrov’s fitness trainer has also been reported to have tested positive.

Dimitrov announced his status Sunday on Instagram and warned everyone who participated in the exhibition tournament to go for a test.

The 29-year-old Bulgarian had been competing in the Adria Tour exhibition tournament in Croatia until he withdrew due to illness during the weekend.

The final of the Croatia event in the coastal resort of Zadar was cancelled as a result.

The second leg of this tour would have featured world number one Novak Djokovic and Russian Andrey Rublev.

“I want to reach out and let my fans and friends know that I tested positive back in Monaco for COVID-19,” former world number three Dimitrov wrote on Instagram.

“I want to make sure anyone who has been in contact with me during these past days gets tested and takes the necessary precautions.

“I am so sorry for any harm I might have caused. I am back home now and recovering. Thanks for your support and please stay safe and healthy.”

Goran Ivanisevic, the director of the tour’s Zadar leg and Djokovic’s coach, was greeted with jeers from the fans when he broke the news courtside.

“We have just been informed that Grigor Dimitrov has tested positive for coronavirus and we will have to call off the final of the tournament in Zadar,” he said.

“Unfortunately we had to make the decision as we don’t want anybody else to catch the virus.”

Dimitrov pulled out of the tournament on Saturday after he felt unwell following his opening singles match against Croatian Borna Coric, who has now caught the virus.

With international tennis suspended due to the COVID-19 pandemic, Djokovic organised the Adria Tour as a charity event designated to be contested over four legs across the former Yugoslavia.

Austria’s world number three Dominic Thiem won the opening leg in Belgrade, where a capacity 4,000 crowd turned up on each day at Djokovic’s tennis centre by the Danube river.

With both Serbia and Croatia easing lockdown measures weeks before the event, players were not obliged to observe social distancing rules in either country.

As a result, they were seen embracing at the net at the end of their matches.

Fans in Croatia, however, were subject to the rules and had to keep their distance, meaning that the 9,000-capacity Visnjik tennis complex was half-full for the event.

The third leg due in Montenegro on June 27 and June 28 was scrapped last week over coronavirus concerns.

The final leg, scheduled for July 3 and July 4 in Bosnia’s Banja Luka, is now likely to be called off.

Djokovic’s brother Djordje, the director of the entire Adria Tour series, said everyone who has been in contact with Dimitrov would be tested for COVID-19 in the next few hours.

“After receiving the news, we took all the measures stipulated by the Croatian government and everyone who has had any contact with Grigor will be tested,” he said in a courtside interview.

Ivanisevic added: “This came as a huge shock. I tested negative three days ago, although I was in Grigor’s proximity. But in spite of the bad news, I want to thank the Djokovic family for making the effort.”

Nino Serdarusic was drafted in as Dimitrov’s replacement.