Many Nigerian politicians find it difficult to mix politics with personal relationships and family except to beneficial purposes but the Executive Governor of Ondo State, Arakunrin Oluwarotimi Akeredolu has shown that it is very possible to mix love, relationship, and family with politics and still maintain a sterling political career.

The beauty of marriage/marital life is that there is a multiplier effect at work at all times. Every word spoken, for instance, descends with twice the strength of one, twice the endurance, and twice the effects. But there must be an alpha partner. In the most powerful residence in Ondo State of Nigeria dwells the first power couple, Governor Rotimi Akeredolu and his wife, Dr. Mrs. Betty Akeredolu.

Mrs. Betty Anyanwu-Akeredolu was born on the 20th of July 1953, to the family of Chief B.U.B and Nneoma Dora Anyanwu, in Emeabiam, Owerri-West, in Imo State. She attended the University of Nigeria, Nsukka where she obtained a Bachelor of Science degree in zoology in 1977. After which she proceeded for a Master of Science degree in Fisheries at the University of the Philippines Visayas in Iloilo City.

Governor Oluwarotimi Odunayo Akeredolu himself was born on the 21st of July, 1956 in Owo to Reverend J. Ola Akeredolu of the Akeredolu family and Lady Evangelist Grace B. Akeredolu of Aderoyiju family of Igbotu, Ese Odo, in Ondo State. Akeredolu started his primary education at Government School, Owo, and then he proceeded to Aquinas College, Akure, Loyola College, Ibadan, and Comprehensive High School, Ayetoro, for his secondary school education and Higher School Certificate, respectively. He went on to the University of Ife (now Obafemi Awolowo University) to study Law, and he graduated in 1977. He was called to the Nigerian Bar in 1978. He later became a Senior Advocate of Nigeria (SAN) and then President of the Nigerian Bar Association in 2008. He was also a Managing Partner at the Law Firm of Olujinmi & Akeredolu, a Law Firm he co-founded with Chief Akin Olujinmi, a former Attorney General and Minister for Justice in Nigeria.  On Sunday, 27 November 2016, he was declared the winner of the gubernatorial elections and subtly Governor of Ondo State. 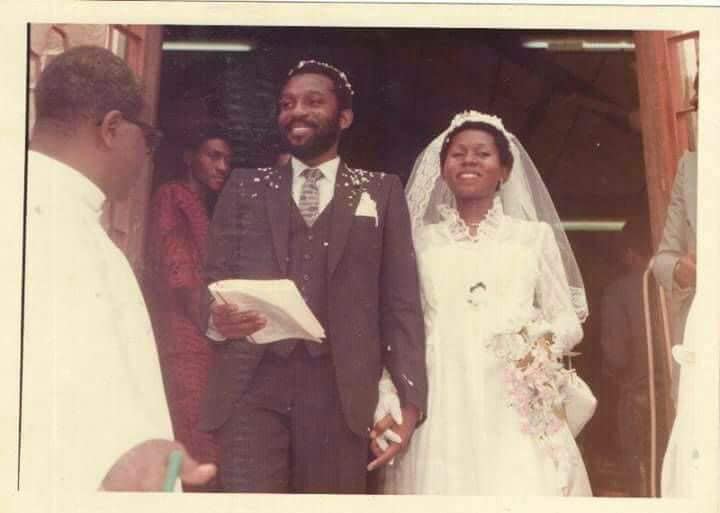 Read Also: Why Ondo Needs To Reelect Akeredolu For A Second Term

Governor Oluwarotimi Akeredolu is not one to withhold words when giving accolades to the impact his wife has had on him and his political career. His wife has also depicted what it means for a strong woman to be beside a successful man through thick and thin.

Their 39-year-old marriage has broken a lot of subtle boundaries in the Nigerian social circle with the fact that she is actually three years older than he is and the fact that she is an Igbo from Imo State while he is from a staunch prestigious Yoruba family. Surely there must have been a lot of resentment and outrage at their choices of partners at that time, but their love for each other and their resilience stuck out like a stubborn stump in s storm. Thirty-nine years later, their marriage has been blessed with four wonderful children and three grandchildren.

Their marital life and relationship should be a yardstick for what it means to be deeply infatuated in a good relationship. They were both from particularly different backgrounds, with different aspirations and different connections, and yet they came together to foster a blissful, enviable relationship that would be very popular in subsequent years hoisting them into the pedestals of power with one of the best Governorship tenures ever witnessed in Nigeria.

Governor Akeredolu is a good man at heart, he is renowned worldwide for his honesty and sincerity of purpose and he is a politician with integrity. He has run a very transparent Government in Ondo State since 2016 and he has depicted what it means to balance work and family together while getting the best out of it. The achievements of his administration in the areas of road infrastructures, business development, security, job creation, industrialisation, and Information Technology must be consolidated upon in the interest of the Younger generation who desire a new direction in line with the tenets of the 21st century which is why he has to be granted another tenure for the betterment of Ondo State. Listen to article Donald Trump, the controversial President of the United States of America once again was in the news for the wrong reasons. The